Everything about MSU-IIT National Multi-Purpose Cooperative 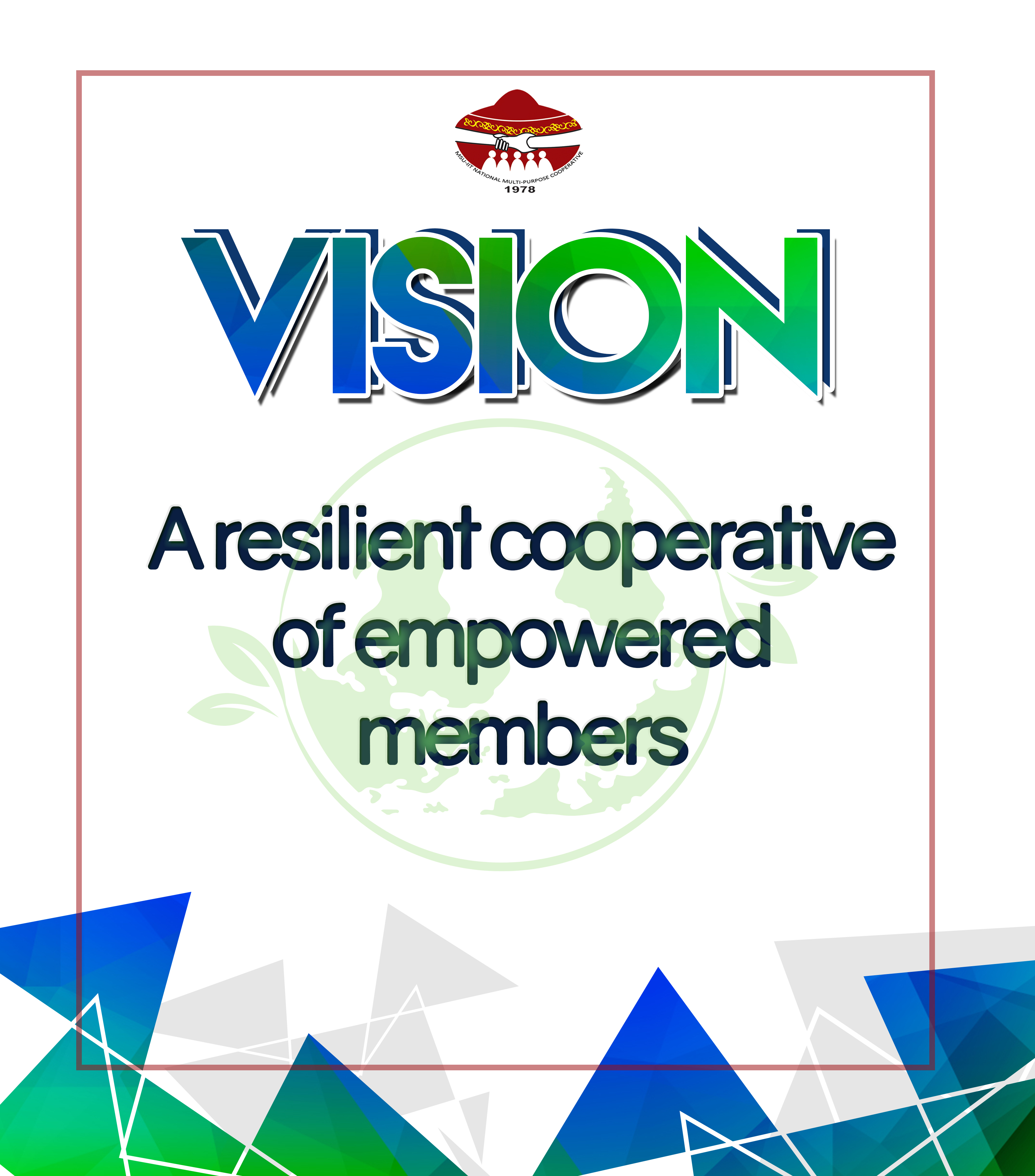 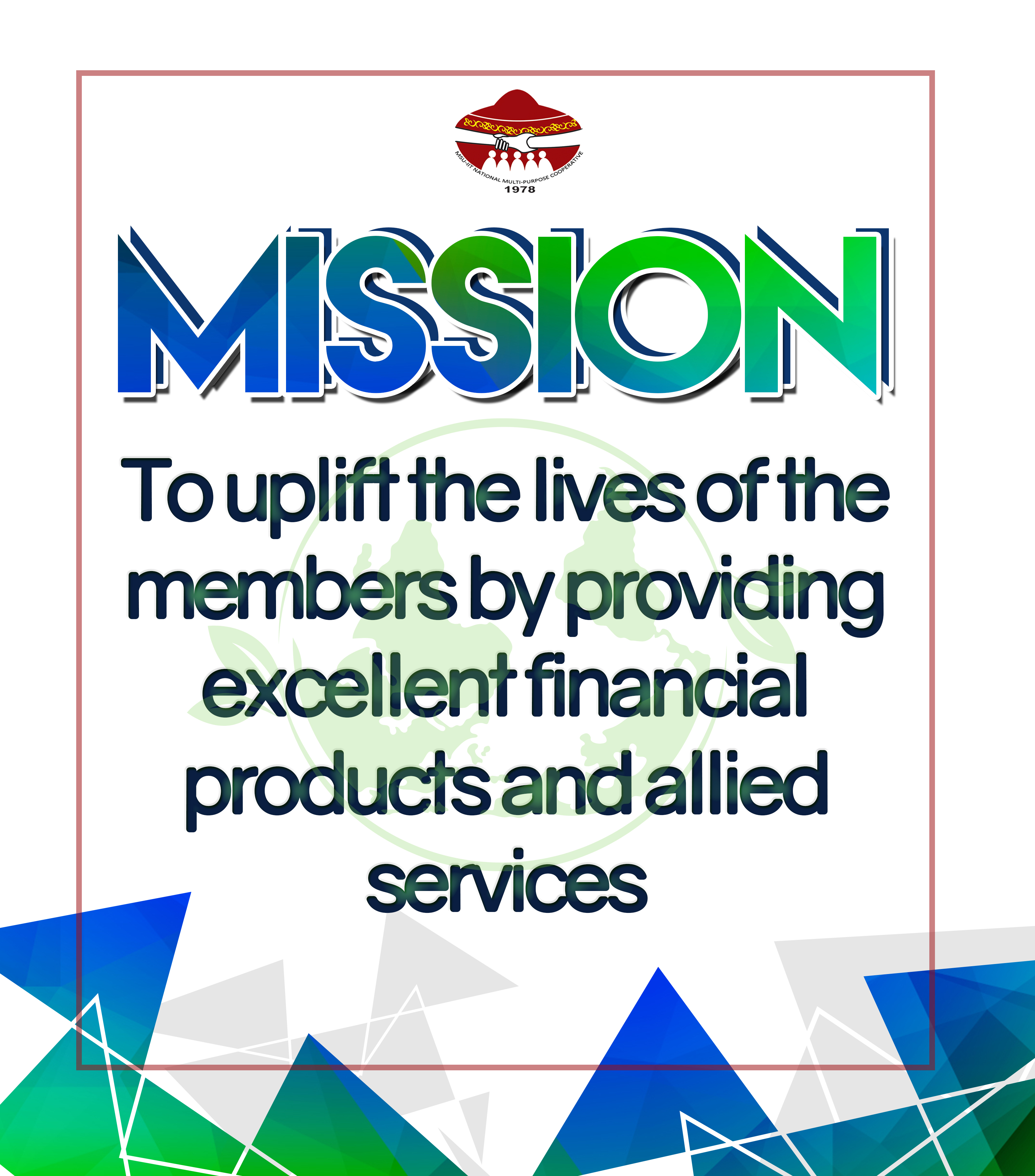 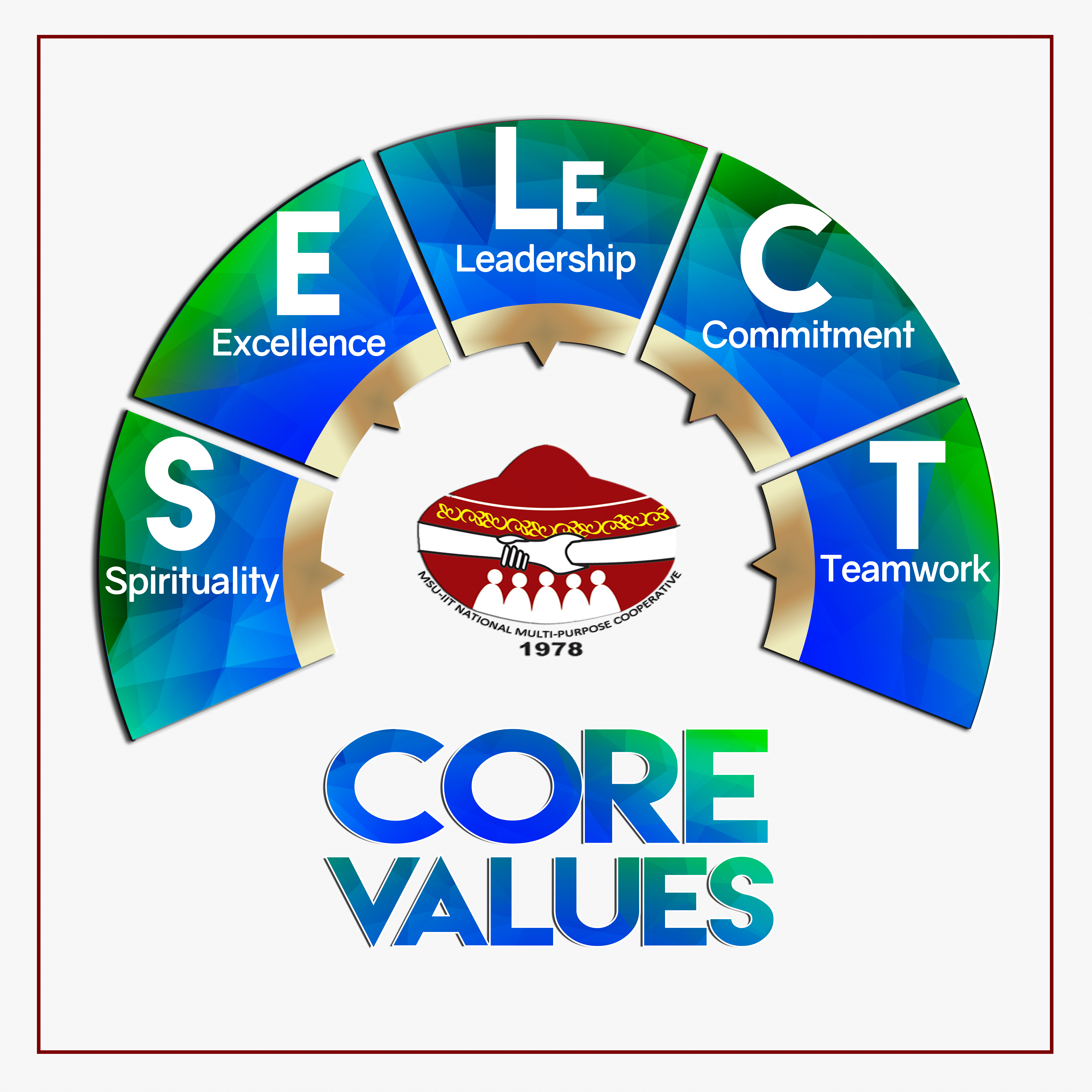 What is a Cooperative?

A co-operative is an autonomous association of persons united voluntarily to meet their common economic, social, and cultural needs and aspirations through a jointly-owned and democratically-controlled enterprise.

Ranging from small-scale to multi-million dollar businesses across the globe, co-operatives employ more than 100 million women and men (20% more than multinational enterprises combined), and have more than 800 million individual members.

Cooperatives were officially born in 1844 when theRochdale Society of Equitable Pioneers established the Rochdale Principles on which they ran their cooperative, when the basis for development and growth of the modern cooperative movement was established.

The co-operative model of enterprise can be applied to any business activity. They exist in traditional economic sectors such as agriculture, fisheries, consumer and financial services, housing, and production (workers' co-operatives). However, co-operative activity spans to large number of sectors and activities including car-sharing child-care, health and social care, funeral, orchestras and philharmonics, schools, sports, tourism, utilities (electricity, water, gas, etc.), and transport (taxis, buses, etc).

Cooperatives are based on the values of self-help, self-responsibility, democracy, equality, equity and solidarity. In the tradition of their founders, cooperative members believe in the ethical values of honesty, openness, social responsibility and caring for others.

The co-operative principles are guidelines by which co-operatives put their values into practice.

1st Principle: Voluntary and Open Membership
Co-operatives are voluntary organisations, open to all persons able to use their services and willing to accept the responsibilities of membership, without gender, social, racial, political or religious discrimination.

2nd Principle: Democratic Member Control
Co-operatives are democratic organisations controlled by their members, who actively participate in setting their policies and making decisions. Men and women serving as elected representatives are accountable to the membership. In primary co-operatives members have equal voting rights (one member, one vote) and co-operatives at other levels are also organised in a democratic manner.

3rd Principle: Member Economic Participation
Members contribute equitably to, and democratically control, the capital of their co-operative. At least part of that capital is usually the common property of the co-operative. Members usually receive limited compensation, if any, on capital subscribed as a condition of membership. Members allocate surpluses for any or all of the following purposes: developing their co-operative, possibly by setting up reserves, part of which at least would be indivisible; benefiting members in proportion to their transactions with the co-operative; and supporting other activities approved by the membership.

4th Principle: Autonomy and Independence
Co-operatives are autonomous, self-help organisations controlled by their members. If they enter to agreements with other organisations, including governments, or raise capital from external sources, they do so on terms that ensure democratic control by their members and maintain their co-operative autonomy.

5th Principle: Education, Training and Information
Co-operatives provide education and training for their members, elected representatives, managers, and employees so they can contribute effectively to the development of their co-operatives. They inform the general public - particularly young people and opinion leaders - about the nature and benefits of co-operation.

6th Principle: Co-operation among Co-operatives
Co-operatives serve their members most effectively and strengthen the co-operative movement by working together through local, national, regional and international structures.

7th Principle: Concern for Community
Co-operatives work for the sustainable development of their communities through policies approved by their members.

During these years series of orientation seminars about cooperative organization were conducted by then Department of Local Government and Community Development among interested employees of the Institute.

Cash deposits by eager and enthusiastic employees were made through Mr. Roberto A. Dangkulos, who acted as Acting Treasurer. It made an initial bank deposit on March 7, 1978 at then Family Bank (now Bank of Philippines Island (BPI)) of Eighty six pesos and Twenty Centavos (P86.20).

This was also the year when the Vice President Manaros B. Boransing acknowledged and recognized the endeavor of the employees by creating a committee on organizing a credit union chaired by Prof. Edna E. Aberilla.

The MSU-IIT Employees Credit Cooperative, Inc. (MSU-IIT ECCI) was formally organized and had its First General Assembly on January 17, 1979. During this assembly its set of officers was organized led by Prof. Edna E. Aberilla as Chairperson.

Policies were laid down, officers went on various trainings in Cebu, Dumaguete, Cagayan de Oro and attended in house trainings in the Institute with invited resource speakers. All these were made possible with the support and assistance of the institute officials led by Vice Pres. Boransing.

The Bureau of Cooperative Development Office (BCOD), the government agency overseeing cooperative operations approved the organization of the MSU-IIT ECCI as a full-pledged credit cooperative.

It expanded its operations by opening a consumer division which was formally opened in July 1983.

In time for the 7th Annual General Assembly, it had its first amendment of the By-Laws and Articles of Incorporation and renaming it as MSU-IIT Employees Integrated Cooperative, Inc. (MSU-IIT EICI). The amendments were approved by then Regional Cooperative Assistance Office (RCDAO) through RC No. FF-005, dated March 21, 1985.

Another service was expanded with the opening of Kindergarten School in coordination with the PFWC, catering to the early education of members’ dependents.

MSU-IIT EICI’s existence was confirmed by the Cooperative Development Authority through the issuance of registration (Cert. No. CR-025-CGY, dated March 22, 1991.

This was also the year when it embarked on a dream project of putting its own building. A memorandum of Agreement was forged between the Mindanao State University and the MSU-IIT EICI, stipulating among others to allow the cooperative the use of 334sqm. Of land at the east gate of the Institute to be utilized for a building of the cooperative. The MOA was likewise confirmed by the MSU Board of Regents in its 144th meeting under BOR Res. No. 75, S. 1991. On August 10, 1991 no less than Senator Agapito ‘Butz’ Aquino led the corner stone laying of the new building.

It was also in the year, that MSU-IIT EICI landed in the pages of the national dailies when it received two national awards as Most Outstanding Cooperative by the Cooperative Union of the Philippines (CUP) and as one of the cooperative finalists of the Sikap Gawa Award by the Bishop-Businessmen’s Conference.

In time for the 14th Annual General Assembly another round of amendments in its Articles of Cooperation and By-laws was approved by the assembly. The amendments made were those provisions to conform with R.A. 6938, as well as an expansion of its membership by accepting dependents of members and MSU-IIT Employees Multi-Purpose Cooperative (MSU-IIT NMPC).

In June 1993, the first floor the MSU-IIT Co-op building was occupied with no less than then Vice Mayor Atenedoro “Dodong” Ruiz leadin the ribbon cutting ceremony.

The Grade School Program was formally launched, and likewise the general assembly gave its nod to expand the services of providing complete elementary education.

Through the assistance of MASS-SPECC, an automated package of the financial recording through micro-banker system was established.

The MSU-IIT NMPC for the first time hired a full-time General Manager in the person of Engr. Deal Noel D. Benegrado.
Identified as one of the 10 Co-ops in Mindanao for the Socio-Economic Development through Cooperatives in the Philippines (SEDCOP) Project of MASS-SPECC and NATCCO. The Project envisioned to set standards that are internationally acceptable.

On its Mid-year GA, the general membership amended the by-laws to shift from closed-type to open type cooperative and accepting members outside of MSU-IIT and the Co-op was renamed MSU-IIT Multi-Purpose Cooperative (MSU-IIT NMPC).

Attained as a century asset cooperative status at the close of December 30, 2002 and listed as the No.49 cooperative in the Philippines with century assets.
Likewise, the Grade School program was further upgraded into Cooperative Academy by offering First Year High School classes.

During this year MSU-IIT NMPC opened three satellite offices which were strategically located at Tubod and Poblacion , Iligan City and at Manticao, Misamis Oriental.

Seeing the growth and need of the people for the cooperative, MSU-IIT NMPC opened another new satellite office located at Suarez, Iligan City and another branch at Maranding, Lanao del Norte. Also this year, Tibanga Main has opened their new Savings and Credit office.

MSU-IIT NMPC'S reputation is known even outside areas of Iligan City. Bulua branch was established this year to cater members and community of Cagayan de Oro City. The coop also celebrated its Pearl Anniversary.

A warm welcome was given to our cooperative as we enter CDO Community. MSU-IIT NMPC built its new expansion at Cagayan de Oro which was located at Cogon. Also Tubod and Poblacion Satellite Offices were upgraded to a full-branch status.

Over a decade of being an open-type cooperative, Head Office was transferred to its new home, located at MSU-IIT NMPC Bldg. Quezon Avenue Ext.,Pala-o , Iligan City

Dissolved the ARA and started our General Assembly by Cluster

Launching of IIT COOP @40 raffle promo for the ruby anniversary 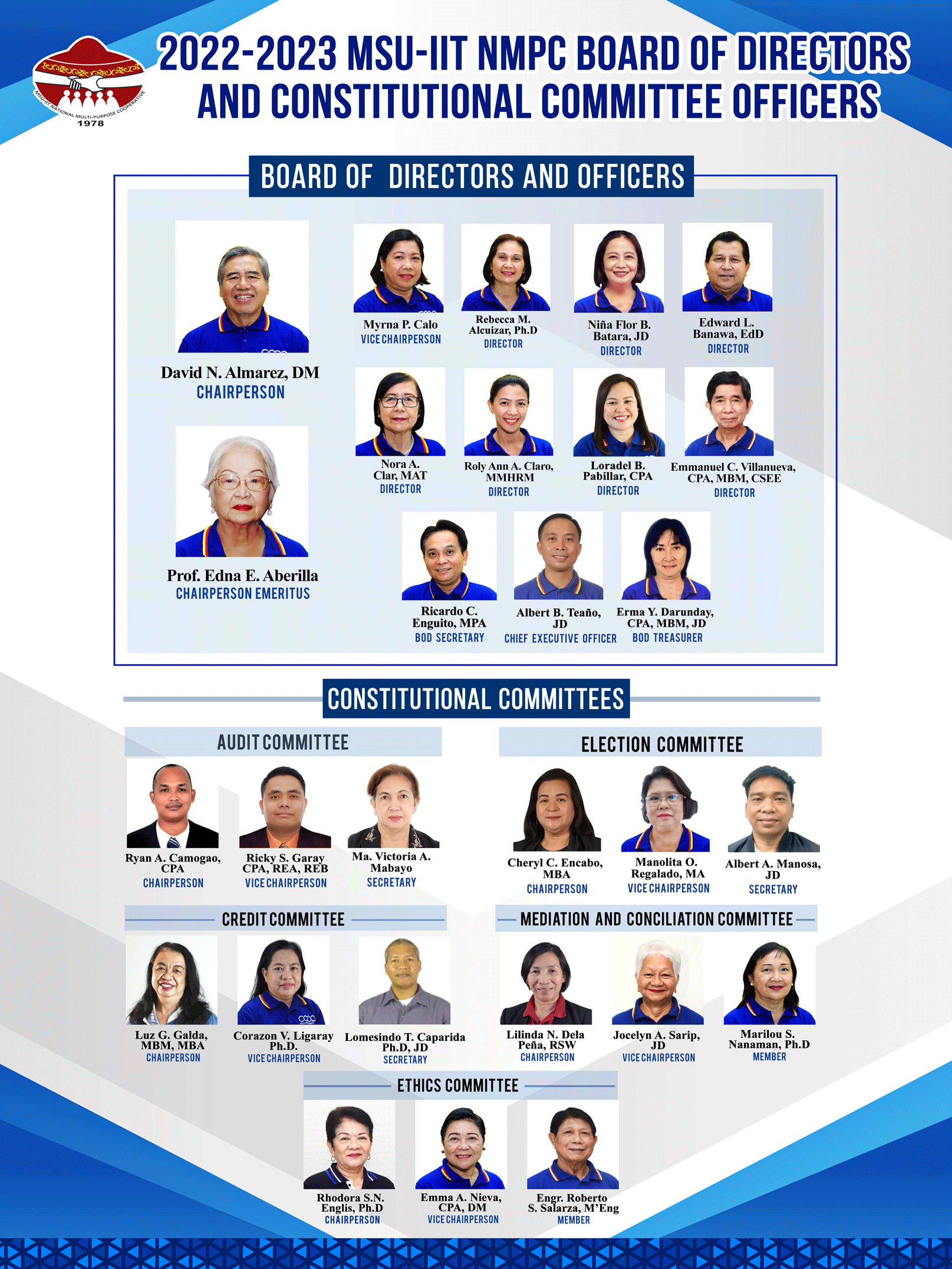 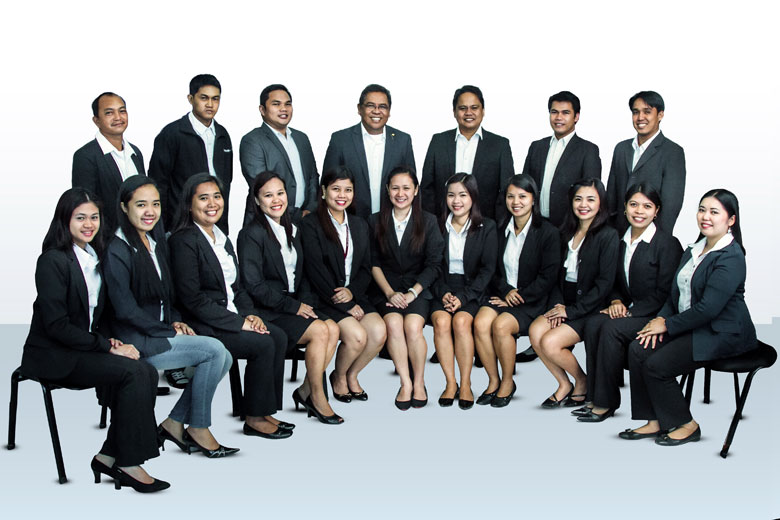 As a Filipino
I am and I believe in the Cooperative.
Alone I am weak
But with others I am strong.

So I commit myself to work to cooperate,
For all to be prosperous.
Harmony, industry I will value.
Cooperative affairs I will attend.
Responsibilities I will assume.
The cooperative philosophy I will live.

One vision, one belief, one feeling,
In cooperativism, my life I pledge
So help me God.